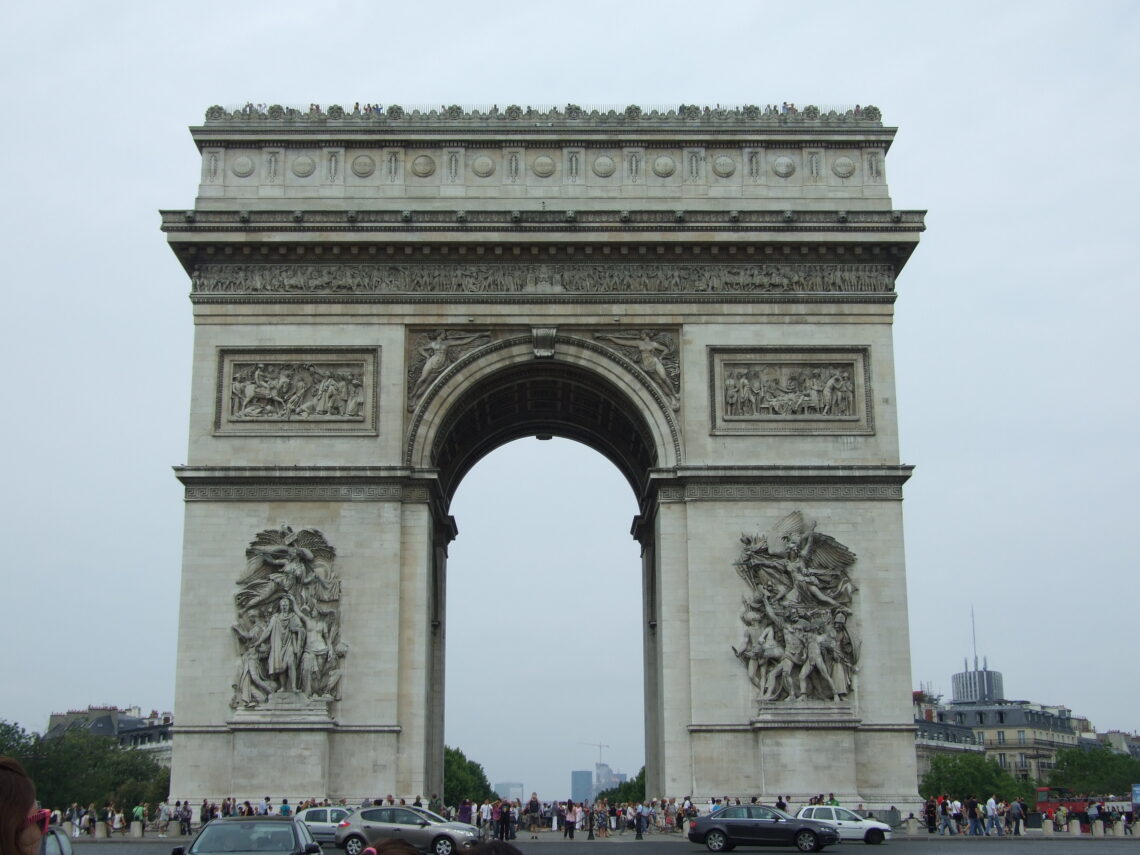 Paris, the city of love, has many famous landmarks and sights to see, such as Disneyland Paris. The Arc de Triomphe is definitely on everyone’s list. It’s a beautiful building to see, but what makes it unique is the perfect view you have from the top. Here’s all you need to know about this famous Parisian landmark.

History of the Arc de Triomphe

Napoleon commissioned the building of the Arc in January of 1806, after his victory on December 2nd at Austerlitz. Architect Jean-François designed the Arc. It took two years to lay the foundations, in 1810 at the inauguration of empress Marie Louise, the walls were only just above the ground. So Chalgrin designed a trompe-L’oeil from wood and canvas.

In 1811 Chalgrin passed away. Napoleon’s tide on the battlefield had turned and the building of the Arc was stopped. Barely 10 meters high at that moment.

Building was commenced in 1932 under King Louis-Philippe (the last king of France) and with Jean-Nicolas Huyot as the architect. In 1836 the Arc was completed. Napoleon did not live to see his Arc finished. King Louis-Philippe inaugurated the Arc in 1836 and dedicated it to the armies of the Revolution and the Empire.

In 1921 an Unknown Soldier, who died in the First World War, was buried at the base of the Arc de Triomphe Paris. Since then it’s a monument to remember the First World War. The tomb was designed after the English tomb at Westminster Abbey.

The Arc is built in Neo Classical style. Jean-François Chalgrin is the architect, who also worked on the Palais and Jardin du Luxembourg, the Saint-Sulpice and the Collège de France.

The Arc is a triumphal arch, which is approximately 50 meters high, and at its base 45 by 22 meters. Chalgrin took as an example the Roman Arch of Titus. An arch on the Forum Romanum in Rome.

Above the arch are 30 shields that depict Napoleon’s most important victories.

Next to that four sculpted groups adorn the abutments of the Arc. The most famous of the four is The Departure of the Volunteers. Created by sculptor François Rude. It’s also known as la Marseillaise. The other three are created by Antoine Étex and Jean-Pierre Cortot, they depict The Entry of Napoleon, The Conquest of Alexandria and The Battle of Austerlitz.

The Arc is on Place Charles de Gaulle, in the 8th arrondissement in Paris. It’s on the Western end of the Champs-Élysées. At the square 12 avenues come together. It’s one of the busiest traffic points in Paris. So when including it on road trips, park elsewhere, before visiting.

Place Charles de Gaulle was renamed, since until 1970 it was called Place de L’Étoile. Since the square and the twelve avenues resemble a star shape.

You can admire the Arc from the outside, visit the ceremony at the tomb or go to the observation platform.

The Eternal Flame is rekindled each day in a ceremony at 6.30pm.

Don’t cross the Arc de Triomphe roundabout to reach the Arch, this is too dangerous. There are two pedestrian tunnels, on the Champs-Élysées and at the Avenue de la Grande Armee.

The top of the Arc can be reached in two ways. Stairs with 284 steps or the lift. When taking the lift you do still have to climb 46 steps. From the top you have a perfect view. You’ll see the heavy traffic downstairs and the star form (etoile) around the Arc.

Inside is a small museum on the building history of the Arc and the festivities and funerals held at or around the arch. This exhibition is here since the 1930s. An historical film is also shown here. You can visit with a self-guided tour, which is downloadable on their website.

Presented here are some random, but interesting facts having to do with the Arc.

Close to the landmark are numerous other landmarks, such as the Champs-Élysées, the Louvre, the Eiffel Tower and the Jardin des Tuileries.

From the top of the Arc you can see the Eiffel Tower, the Grande Arche de la Défense and the Place de la Concorde among the many other landmarks visible.

The entrance to the Arc costs €13 for adults. Under 18 are free of charge, so are also 18 to 25 years old if they’re nationals of European Union countries or non-European regular residents on French territory. Third group that are free of charge are disabled persons and their companion. The ticket must be bought online. Right now everyone must have a ticket, also the persons free of charge. You have to print your e-ticket at home or present it on your phone.

Only with the Paris Museum Pass you don’t need an online reservation.

You’re not allowed to bring a selfie stick, tripod, motorcycle helmet, scooters, roller blades, sharps or glass bottles with you. And the luggage max is 40 by 40 by 20 centimeters.

There’s no baggage deposit offered at the monument.

For the current rules and regulations you have to check the monuments website.

Since its founding the monument has been the center and décor of important national events, festivities and parades.

One of the last events was Arc de Triomphe Christo. Christo had made plans to wrap the Arc already in 1962. It finally happened between September 18 2021 and October 3 2021. Christo sadly did not live to see it, but he wanted the project continued after his death. The monument was wrapped in 25 000 m² of polypropylene canvas and red rope.

How to Reach the Monument

By car is madness, you can drive around the monument. But parking is a nightmare and so is driving here. But if you do then Porte Maillot and avenue de la Grande Armée or Porte Dauphine and avenue Foch as directions.

There’s ample choice on where to eat near the Arc. From French cuisine to fast food, all is within a short distance of the monument. Be aware that this is a highly touristic area, so prices are accordingly.

On the Champs-Élysées are two stops of our Paris Macaron Walking Tour.

Some hotels in Paris are mentioned in Stopover Hotels on the Way South. None of these are however close to the Arc.

Hotels that look good and are close to the Arc: Hôtel Du Bois Champs-Élysées, Hôtel Plaza Étoile and Élysées Ceramic.

All you need to know for your visit to the Arc de Triomphe. I hope you have a wonderful visit to this beautiful landmark. 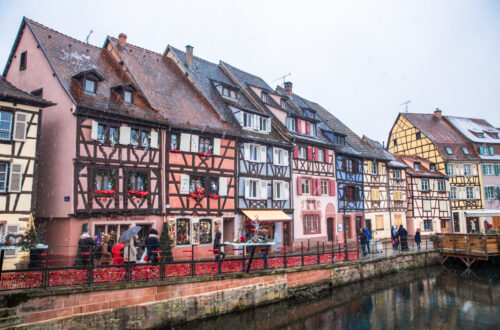 30 of the Best Cities to Visit in France 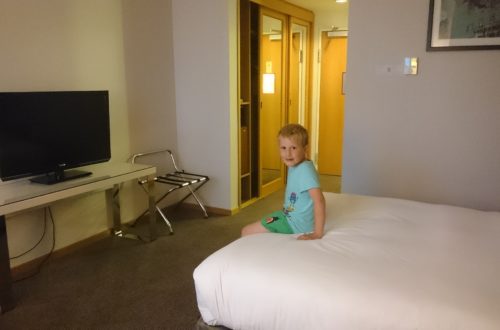 Stopover hotels on the way South 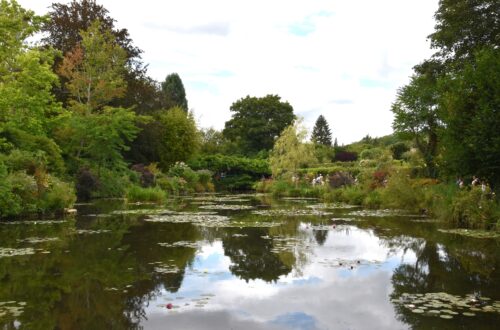