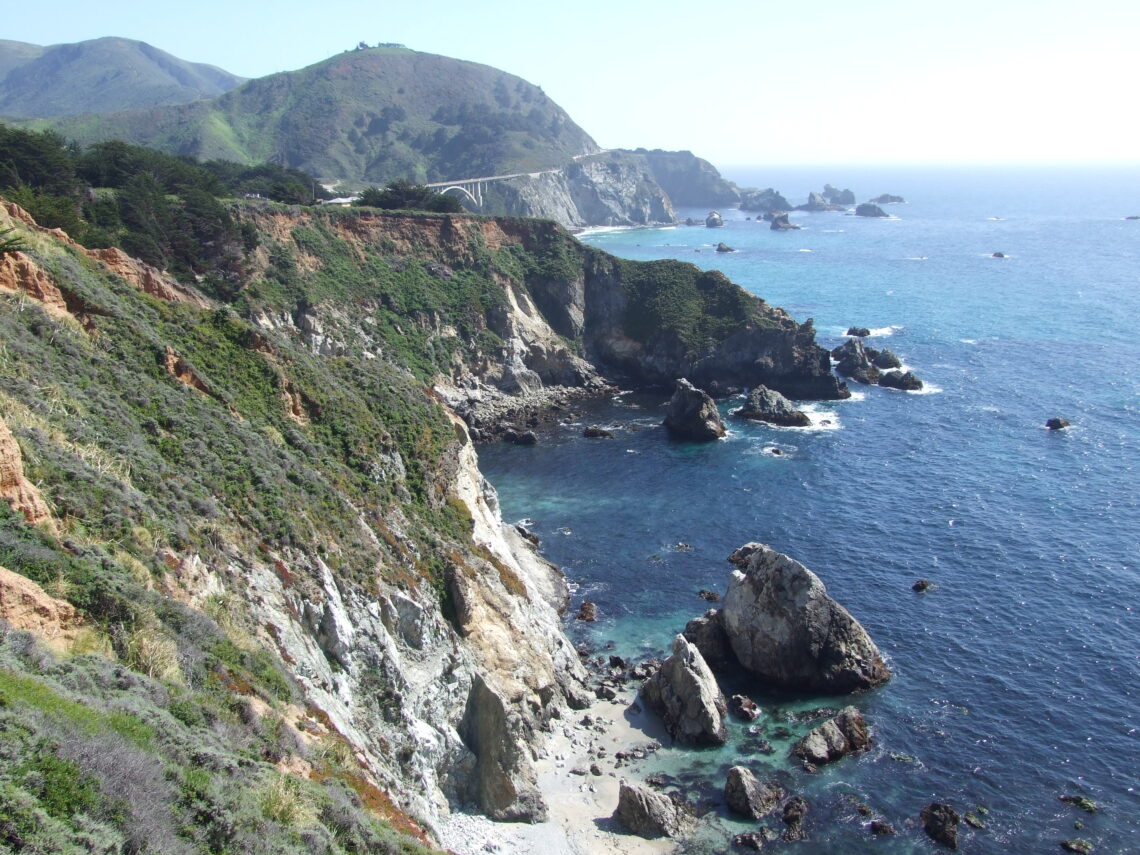 A California Road Trip with Highway 1, the big cities and famous National Parks in it, it’s what lots of people dream of seeing once in their life. This road trip of California is technically a California and Nevada road trip, since it starts in Las Vegas. The whole Californian road trip stays in California after Las Vegas.

From Las Vegas to a string of stunning National Parks ending in San Francisco, from there on heading south on Highway 1 with mesmerizing ocean views ending all the way in San Diego. This is a perfect California Nevada road trip.

Day 7: Drive from Oakhurst to San Francisco (288 miles, about 5 hours and 15 minutes, via toll roads)

This was such a beautiful road trip, a dream come true. We really wanted to drive Highway 1 and visit Yosemite and Death Valley. With this California Nevada road trip itinerary you can tick many of your bucket list items.

Las Vegas is a world on its own. You have to see to believe it. We arrived late, it was already dark, but that isn’t a problem, since Las Vegas comes to life in the evening/night. We only strolled around a short part with Yuri sleeping in the stroller. Paul and I had already been to Las Vegas on a South western road trip. It’s fun to walk up and down the whole Strip and walk into the hotels and admire their grandiosity. There are several free shows which you can watch, like the fountains at the Bellagio.

Leave Las Vegas early in the morning, not much show at that moment on the Strip. Drive to Death Valley National Park. This is the hottest, driest and lowest National Park in the USA. Drive the road through the park and walk on the Badwater Salt Flat, the lowest point in North America. Next to that take a hike at Mesquite Flat Sand Dunes. We only hiked a short bit at Badwater Basin, since it was too hot for our son. Since he was only one at the time, he couldn’t express properly yet if he was too warm.

Be mesmerized and astonished by the sequoia trees. They’re so high and beautiful. We took one day for each park. There was still lots of snow when we visited, a great difference in temperature with Death Valley a few days before.

Go on hikes in both parks to tunnel log, General Sherman Tree and General Grant Tree. Stop at the viewpoints. Take the whole 4th day for Sequoia National Park and the morning of the 5th day for Kings Canyon National Park. Then drive to Oakhurst.

You have a day and a half for this famous national park. We had some less time because it turned out that Yuri had the chickenpox. So we stayed at the hotel the first morning and only went to the park in the afternoon.

Go on one of the hikes. We explored the Valley, where most people go to. We did the Bridalveil Fall Trail. On the 7th day we did the Yosemite Mountain Sugar Pine Railroad, a small steam train which we liked very much, especially our son. We drove again through the Valley, the views on El Capitan and Yosemite Falls are amazing and something you don’t get tired off.

From Yosemite National Park drive all the way to San Francisco, it’s a long drive, a little bit longer than we expected, but we already had made a reservation for the hotel in San Francisco.

San Francisco has lots to offer and you can’t explore all of it in 2 days. We explored Chinatown, Fisherman’s Wharf, Lombard Street, Alcatraz, Golden Gate Bridge, Pier 39, Hyde Street Pier and the Cable Car. We didn’t venture far outside of the tourist area, since we still had a sick kid with us, so we took it slow.

Fisherman’s Wharf and Pier 39 are very touristy, but watching the sea lions is fun and strolling around on the Wharf is great. As historians we just had to see Alcatraz. Driving over and walking on The Golden Gate Bridge is iconic. Visit the Golden Gate Bridge on day 10, just before starting on Highway 1.

Be prepared to stop every few meters, since you see another splendid view on the ocean. Besides stopping at every view point, there are numerous attractions along the way. Naming here the ones we stopped for along the way or made a small detour for.

Drive the 17 Mile route on the Monterey Peninsula, enjoy the views and stop at Spanish Bay, Point Joe, Cypress Point, the lone Cypress and Pebble Beach.

Close to Monterey is the town Carmel-by-the-Sea, a lovely and romantic seaside destination. Visit the Carmel Mission for some tranquility and history about the Spanish missions in California.

Then drive the famous Big Sur part of Highway 1, with the Bixby Creek Bridge. Big Sur is the part of Highway 1 between Carmel and San Simeon. Enjoy the really beautiful, mesmerizing views without interruptions. We sadly couldn’t drive all the way to San Simeon, since there was a road closure due to a landslide. Hearst Castle is worth a visit and one of the most beautiful fairytale castles in the world. We had to make a detour and entered Highway 1 at Harmony again. Luckily we got to drive this part of Highway 1 year later on our Orlando to San Francisco road trip. Hike to McWay Falls, one of the most beautiful waterfalls in North America.

Visit Bubblegum alley at San Luis Obispo or one of the many wine orchards in the valley. Then head on over to Santa Barbara with the Moreton Bay Fig Tree and the beautiful center with its splendid architecture.

On the last part of Highway 1 till you reach Los Angeles, it’s beach time. Visit Ventura Pier, play on the beach at Malibu and go to Santa Monica Pier, where the end of route 66 is. Route 66 and Highway 1 are both iconic road trips in the US.

Upon arrival in LA we first went to the Hollywood Walk of Fame, where we admired the stars on the boulevard. Visited the TCL Chinese Theatre and had dinner there.

The next day we went to Universal Hollywood and did a Star Houses tour. This was a package tour. They brought us to Universal and picked us up again and then we had a 2 hour tour through LA. Seeing the homes of stars and famous places from movies. It was fun. At Universal we did a tour of the sets, among them the set of Gilmore Girls.

For our last day in LA we went to Disneyland, which was our second Disney park then. We had already been to Disneyland Paris and a few years later to Disney World. Disney is always a good idea. It’s just magic!

On this day, drive from Los Angeles to San Diego on Highway 1 along the coast.

Visit Oceanside for the historical, wooden pier, an iconic landmark. After that stop at La Jolla Cove for the seals.

We went to SeaWorld during the day and met up for dinner with a friend we had met at the Hurtigruten cruise back in 2009. On the last day we flew home. We liked SeaWorld, but if we would be visiting right now we probably would go to Old Town San Diego State Historic Park, Balboa Park or the USS Midway Museum.

We made this road trip back in 2011, so I couldn’t find all the hotels we stayed at anymore. Except for at Las Vegas, San Francisco and Gorda we stayed at Best Western. We booked them same day or just drove as far as we liked that day and stopped at a Best Western.

In Las Vegas we stayed at the Excalibur Hotel and Casino with a swimming park. At Lone Pine, past Death Valley National Park we stayed at Best Western Plus Frontier Motel. At Yosemite we opted for the Best Western Plus Yosemite Gateway Inn. In Gorda we couldn’t go further because of a road closure. Just before The Redwood House Gorda Springs Resort. We loved our stay here, with a view on the ocean from our cottage.  We had a luxurious last stay in the USA at the Best Western Plus Island Palms Hotel & Marina in San Diego.

In San Francisco we enjoyed dinner at the Franciscan crab restaurant and lunch at the Sea Lion Cafe. From the last one you can look down on the sea lions at Pier 39.

This is a route you can drive all year round. We drove it in April/May. We had beautiful, warm weather at Las Vegas, Death valley and along highway 1. In Sequoia and Kings Canyon there was still lots of snow in late April. At Yosemite National Park the Tioga Pass was still closed due to snow. But there’s plenty of other things to see at the park. The Tioga Pass is usually only open during the Summer months. During the Christmas season not everything may be open, but San Francisco and Solvang are among the best places to celebrate Christmas Around the World.

Make it a round trip, add a few days at the end.

This ends the California road trip