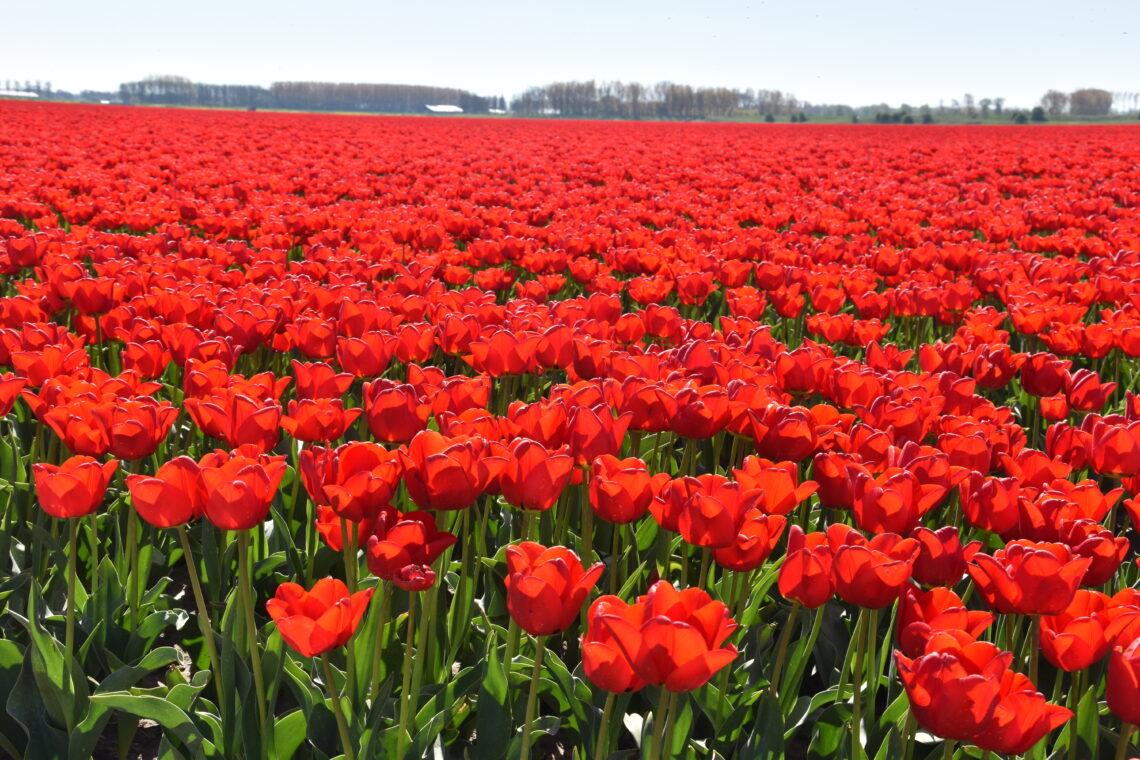 It’s tulip season in the Netherlands! We drove the tulip route Holland on Easter Sunday. Not as famous as the Flower Route, which is also in the province of Zuid-Holland. Due to it being less popular, there’s less people to share these famous tulip fields with. This tulip route is on Goeree-Overflakkee, an island in the South of the Netherlands.

We followed an old route from the ANWB, which they don’t update anymore, you can find it here in Dutch. There’s a map provided on that link. The following towns and cities are included:

This tulip route Netherlands is a one-day road trip. Lots of tulip fields and cute little towns with harbors. This route doesn’t give the exact tulip fields in Netherlands location, since that differs each year. But you can’t miss them, since they’re so colorful.

A small town that has a seal care center and a bird observation. The white painted windmill Korenlust can be seen from afar.

This town is surrounded by tulip fields in Spring time.

The town has the Streekmuseum Goeree-Overflakkee where you can learn all about the history of the island. It’s situated in a row of 17th century step gabled houses. The most beautiful street on the island.

Adjacent to Sommelsdijk, the two places look to be one town, but have just grown overtime. Middelharnis is the largest town on Goeree-Overflakkee.

The town has a harbor on the Haringvliet, which has a small beach and walking paths with nice views on the water.

A small town with a cute, old harbor on the Haringvliet. Perfect if you love to recreate on the water. There’s also a beach.

This small town has a cute little harbor and of course a windmill (like every town on Goeree-Overflakkee).

Ooltgensplaat is a beautiful town with a fort. Fort Prins Frederik is being renovated completely. Just outside of the town you’ll find tulip fields.

A town with a cute old harbor on the Volkerak. This town had the most deaths during the watersnoodramp in 1953 (10% of its population), there’s a cemetery that leaves an impression of this disaster.

There’s a small zoo in this town: Faunapark Flakkee, which you pass on the route.

A small town with a harbor and a marina on the Grevelingen lake.

The factory of Hertog ijs used to be here, a famous ice cream label in the Netherlands.

There’s the lighthouse Westhoofd, a beautiful red lighthouse which dominates the sky. Further there’s a goat farm, De Mèkkerstee, with a store, cheese farm, ice cream parlor and playground. Visit the RTM museum, a railway museum. Then there’s also a Bunkerroute to hike, which takes you along bunkers from the Second World War.

This historical city is small, however it gained city rights in 1312. You can climb the tower of Goedereede, it also has a museum inside on the city’s history and the tower. It’s a landmark of the city, dominating the skyline. There’s a small harbor in the city.

We drove this route on Easter Sunday a few weeks ago.

We had something to drink and a sundae ice cream at Cafetaria t-Hoad in Middelharnis. The terrace has a view on the beach and on the Haringvliet.

We had something to drink on the terrace of Hotel-Restaurant “Lely” in Oude-Tonge.

We stayed at Fletcher Hotel-Restaurant De Zalm in the middle of Brielle, a fortified city. We can also recommend Carlton Oasis Hotel in Spijkernisse, just like Brielle on the island of Voorne-Putten. Which is above Goeree-Overflakkee.

On the island Schouwen-Duiveland, below Goeree-Overflakkee we’ve stayed at Fletcher Landgoed Hotel Renesse and at Roompot Vakantiepark Aquadelta in Bruinisse. The last one has apartments and holiday rentals.

A bit further away from Goeree-Overflakkee, but still in the province of Zuid-Holland are Landal Beach Villa’s Hoek van Holland. We loved the cabins situated on the beach. Two hotels we can recommend are Fletcher Hotel-Restaurant Carlton in Naaldwijk and Van der Valk hotel Ridderkerk. When driving around in a camper, than Camper Park Kinderdijk in Alblasserdam is a good idea, one of our recommendations for campsites with kids in the Netherlands.

The route can be driven all year long. When to go to the Netherlands to see tulips? It varies a bit when exactly the tulip fields are in bloom, but say from about half way of April till the beginning to half way of May.

We drove the route with our own car. When hiring a car, we have excellent experiences with Hertz, Alamo and Stern. So how to get to the tulip fields from Amsterdam? By car, if you’re going for the Goeree-Overflakkee tulip fields. Take the N215, N57, A4 and S112.

The Tulip Route Holland is Beautiful

Looking for a less crowded road trip with tulips, but still with plenty of famous tulip fields the Netherlands is known for, than this road trip on Goeree-Overflakkee is perfect for you. 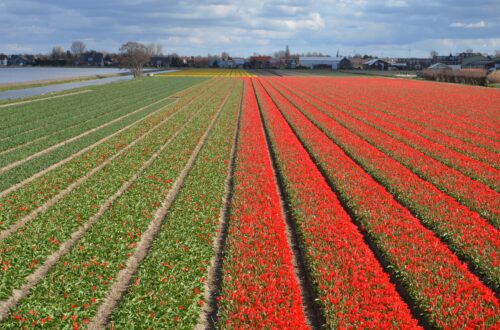 The Flower Route: a Road Trip with Tulip fields. 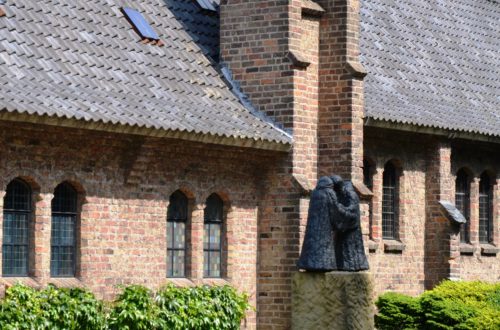 A visit to the Willibrordus Abbey