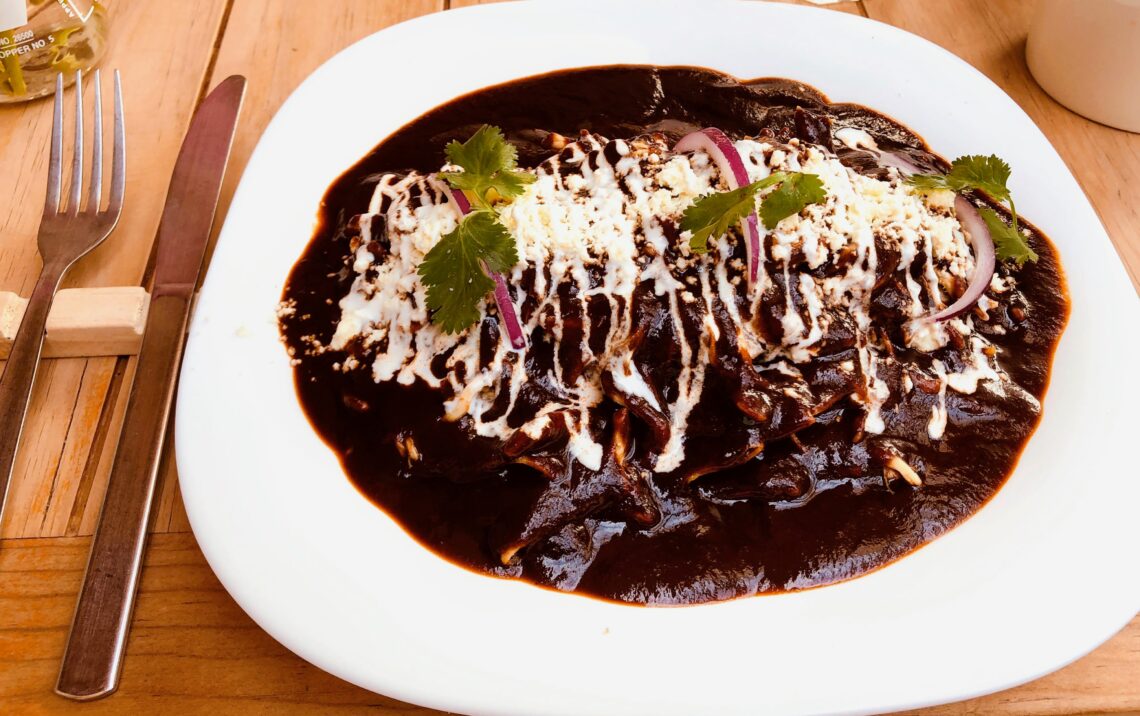 If there’s one word you think of when you hear the word Mexico — it’s tacos! While tacos are the undisputed king of Mexican food, Mexico has so much more to offer in terms of cuisine.

In fact, in 2010 UNESCO declared Mexican food an Intangible Cultural Heritage of Mankind, stating that it represents “a crucial element of national identity.” In plain English, this basically means the United Nations thinks Mexican food is one of the essential parts of the country’s unique culture.

Mexican food is also, well, delicious! Being such a large country, the cuisine varies from region to region and state to state. Let’s examine some of the most famous dishes from coast to coast, starting with, of course, tacos al pastor.

The funniest thing about Mexico’s most beloved taco is that it actually originated in the Middle East! If you’ve ever seen a trompo, the Arabian-style spit pastor (pork) meat is cooked on, you might have guessed this.

Little known fact about Mexico: The country actually had a large influx of Lebanese and Middle Eastern immigrants from about 1880-1935. Among other things, these people brought their customs and of course, their cooking techniques.

After they arrived with their meat-on-a-spit cooking style, Mexican cooks took what was essentially a gyro or shawarma cooking technique, and made a few adaptations. The most notable of these is the use of pork meat instead of the beef, lamb and turkey common in the Middle East.

Mexicans cooks next changed the marinade and started to season the meat with local spices like chile de árobl (tree chili) and chile guajillo. The last adaptation was the addition of pineapple, which you’ll see at the top of the trompo.

As a joke, many Mexicans will often ask one another if they’ve had their Vitamin T for the day. The “T,” of course, stands for tacos — but it also stands for other “T” foods like tortas. Tortas are basically sandwiches, and what they contain will vary from state to state.

Though eaten throughout Mexico, the torta (sandwich) is commonly associated with Mexico City. While most of the world knows tacos as the quintessential street food, busy chilangos (locals) in the metropolis of Mexico City take the grab and go concept one step further.

While a torta can be any sandwich made on bolillo bread, some of the common tortas in Mexico City are guajolotas (torta with a tamale) and torta de chilaquiles. Chilaquiles is a beloved Mexican breakfast dish made with day-old tortilla chips soaked in salsa.

In Mexico City’s neighboring state of Puebla, it’s all about the cemita. These sandwiches are giant; honestly, they aren’t easy to eat, but they are really easy to enjoy. A typical cemita comes with puerco empanizado (breaded pork cutlet), quesillo (string cheese), avocado, chiles and other veggies on a sesame seed bun. The bun is what separates a cemita from a torta.

Another Mexican Vitamin T food is the tamale. A tamale is basically masa (corn meal) steamed in a corn husk or banana leaf. The former is the more common, with the banana leaf variety found mostly in Oaxaca.

Known as a tamales oaxaqueños (Oaxacan tamales), or tamales ojas (leaf tamales), this staple of Oaxacan food is served throughout the state in restaurants and mercados (local markets). You can get yours a number of ways, including topped with chipil (a local Oaxaca herb), frijoles (beans), rajas (roasted poblano peppers) and tamales dulces (sweet tamales).

To really get a taste of Oaxaca, tamal de mole. Mole is one of the most beloved foods all over Oaxaca, a state known as the foodie capital of Mexico.

Speaking of Oaxaca, this state is home to Mexico’s co-national dish, mole.

Mole is both a marinade and a sauce, and in fact, there are seven official types of mole, all made with their own unique combination of fruits, nuts and spices. The most popular of the seven types is called mole negro (black mole), which gets its black color from chocolate.

Mexicans eat mole a number of ways, including as a sauce on top of chicken and rice, as a stand alone stew-style dish, on a tamale and with enmoladas. These are basically enchiladas, but smothered in a mole sauce instead of salsa, which goes on top of traditional Mexican enchiladas.

Wondering what Mexico’s other co-national dish is?! It’s the chile en nogada. Though much relatively unknown for a national dish, once you see this green, white and red creation — representing the colors of the Mexican flag — it all starts to make sense.

Chile en nogada is only eaten for about two weeks per year in early- to mid-September to  commemorate Mexican Independence Day on Sept. 16. In fact, some say the chile en nogada was first made in the city of Puebla after the signing of the Treaty of Cordoba, signaling Mexico’s independence from Spain.

So what’s in this patriotic dish? The “green” position of this dish is a chile poblano which is stuffed with a picadillo of meat, nuts and fruits; the white sauce is called en nogada and made with walnuts and cream; and the red component comes from pomegranate seeds.

Barbacoa, which translates to barbecue, is a decidedly weekend food. Now, this doesn’t just mean barbacoa is something eaten on the weekends, but also that it’s only available on weekends.

The reason for this is because barbacoa takes nearly all week to properly prepare and cook. To prepare it, cooks wrap meat in banana leafs and slow cook it for days in an underground oven.

As mentioned, Mexican food is incredibly regional, and varies from state to state. The state most associated with barbacoa is Hidalgo in Central Mexico. The type of meat used differs from region to region, but Hidalgo style barbacoa is made from borrego (sheep).

This beloved dish comes from the state of Jalisco. Birria is kind of two dishes in one — tacos and a consomé (soup).

In Jalisco, many of the foods are served ahogada style, which means “drowned.” Besides birria, a taco you “drown” in your consome, Jalisco is also famous for their tortas ahogadas (drowned sandwiches).

When eating birria, you’ll receive meat tacos of likely goat or sheep meat, and a side of bright red consomé broth. This soup gets its red color from chile guajillo, one of the most common chiles used throughout Mexico.

Though the words seafood and Mexico aren’t commonly seen together, no country with 5,800 miles (9,335km) of coastline — like Mexico has — doesn’t also have some amazing seafood dishes.

The most well known and well loved is ceviche. Enjoy this refreshing seafood dish in any beachfront Mexican seafood restaurant along the coast, and wash it down with a cold beer or agua fresca (fruit water).

Throughout Mexico’s coastal towns, you’ll usually find shrimp, fish and octopus ceviche options. Beyond the protein, ceviche is a simple dish that consists of some diced tomatoes and onions, a little cilantro and a lot of lime juice.

This is where the ceviche magic happens as the lime juice “denatures” (meaning, “to take away or alter the natural qualities of”) the protein. In the case of ceviche, the citrus juice takes away the raw qualities of the fish, and makes it more firm, just like the cooking process would.

While some mistakenly say the citrus juice “cooks” the seafood for ceviche, it actually just denatures it. To cook, you’d need to apply heat, and there’s no heat used in ceviche.

In most parts of Mexico, pork is the protein of choice. Even in Northern Mexico, the beef capital of the country, you’ll still find pork dishes in every restaurant.

However, if there’s one part of Mexico where pork is a staple food on all tables, it’s the Yucatan Peninsula.

The area’s native Mayan people have perfected a dish known as cochinita pibil, which is suckling pig slow-cooked in an underground oven called a pib. This traditional, Yucatecan delicacy gets its unique taste from naranja agria (sour orange) and achiote, two plants native to this part of Mexico.

If tacos al pastor rule in Central Mexico, over on the West Coast, it’s all about the fish taco. These famed Mexican tacos are most associated with the states of Baja California Sur and Baja California Norte.

The two Baja states are a peninsula, so they have a lot of access to waters to fish in. For this reason, people in this part of Mexico eat a lot of seafood dishes, though none as beloved as the fish taco.

The fish taco is humble: consisting only of medium-sized pieces of fried fish, a cabbage slaw, maybe some avocado slices, and salsa, all wrapped up in a corn tortilla. Though simple, it’s the freshness of the fish that makes these tacos shine.

While yes, this list started and ended with tacos, Mexican food is clearly so much more than just one food. What from this list do you now most want to try?

This is the second post on food from a country, the first one was about Dutch Traditional Foods you must try. What I know after reading all this, is that I actually want to hop on a plane and try all these great Mexican dishes, they are that well described by Shelley. For now I will settle for Popocatepetl in Haarlem. After exploring Mexican Food we will be trying out Bulgarian cuisine.

Shelley is a former Miami travel magazine editor who ditched the office for the world! After traveling solo to 14 states in Mexico, she now calls Mérida home. She created the Travel Mexico Solo blog and Dream To Destination podcast to help women cross Solo travel and Mexico travel off their bucket list. 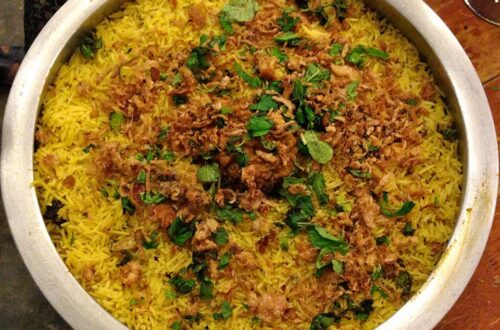 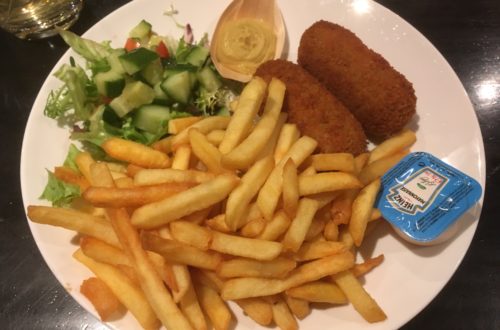 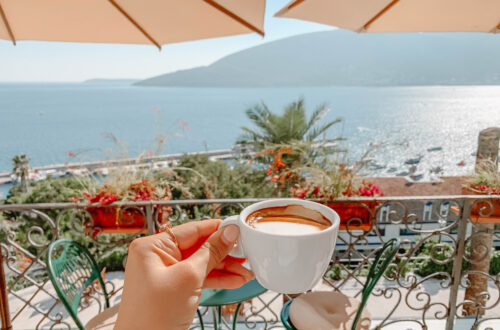 Favorite Coffee Shops in the World