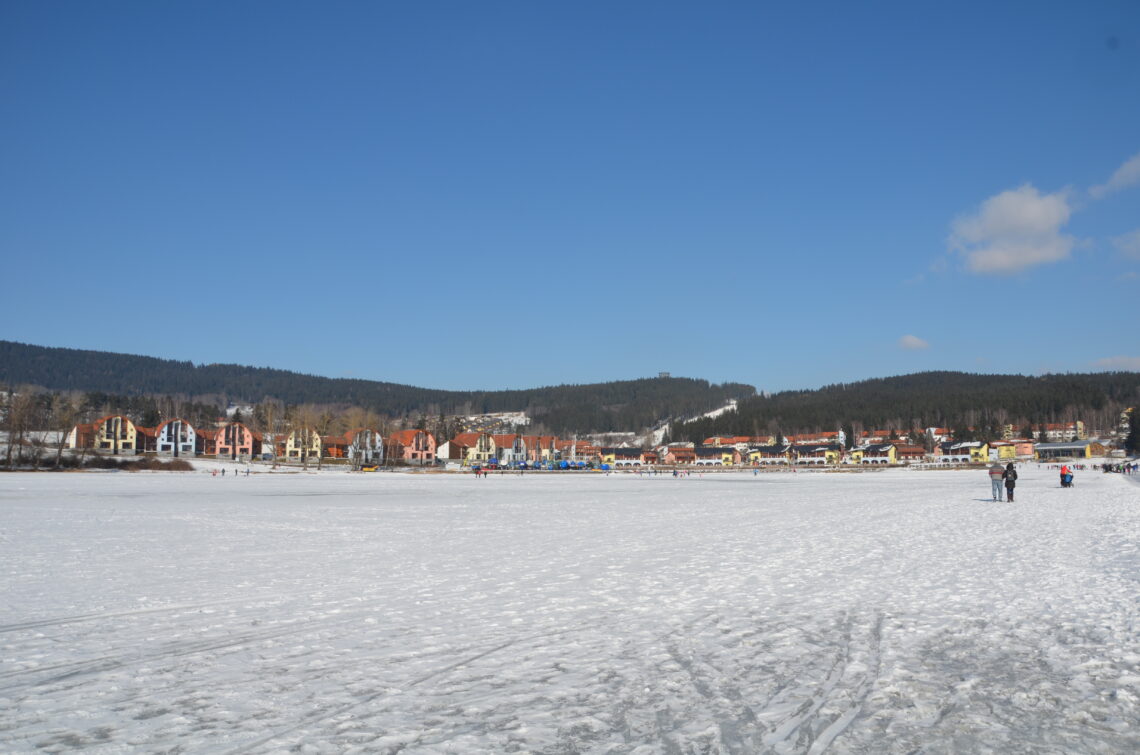 The ski area is on 710 to 900 meters height. There are 4 ski lifts for 13,5 kilometers of ski slope for skiing and snowboarding, with 10,9 kilometers of beginner, 2,1 kilometers of middle and 0,5 kilometers of heavy tracks. It’s a small ski area, which is fun for families. At the end of the first ski lift and at the beginning of the ski area are several restaurants. There’s the Fox park Lipno where kids can get ski lessons.

Ice skating on the lake

This is the number one thing on the Lipno lake, why Yuri wanted to come back the next year. The Lipno lake freezes over during the winter and then they set out several parcours on the ice. One is close to Lipno nad Vltavou. Yuri learned to ice skate here the first winter. We did the whole parcours several times, which is a couple of kilometers long.

The first treetop walkway in Czechia. The walkway leads to an observation tower with 360° views. The tower is on 40 meters height and the walkway is situated on a mountain, so the views extend far. You can go down the same way you came or with a slide, 52 meters in length. There are educational and physical stops along the walkway. We’ve done the walkway twice and the views are breathtaking.

The public swimming pool has a whirlpool with a view to the Lipno lake, a sauna, a kiddy pool, a water slide and a track with rapids. Enough things to have a few hours of fun.

We love sledding and there’s plenty of room for it in Lipno nad Vltavou. At the ski area is a hill you can sled down from over and over again. When there’s enough snow you can sled on the hilly sides on the Marino Lipno Lake Resort of Landal.

Walking in the snow

There’s plenty of hiking opportunities near Lipno lake Czech Republic, we opted for some shorter distances. We walked up the mountain to the treetop walkway. Which is loads of fun in the snow. We also walked the parcours for ice skating, and you have some beautiful panorama’s in the middle of the lake.

There are 2 tracks for bobsledding at the slideland, but only one is open in winter time. The other one is covered in snow then. It’s fun to go up and down part of the mountain in a cart.

Both times we stayed in an apartment at Landal Marina Lipno. We had a fantastic view on the lake. It’s close to the lake as well as the ski area. The park offers animation activities, like making your own pizza or a lantern procession.

We enjoyed sitting down and having lunch, dinner or a pastry at Restaurace Marina Lipno, H&M Steak Restaurant, Marina café and Restaurant-Karolína. Marina café has the most delicious cakes and ice cream.

So these are our Lipno nad Vltavou things to do in winter activities, which we highly recommend you check out. We just have to visit in Summer so that we can see what to do in Lipno nad Vltavou when there’s no snow. For other fun activities in the winter check out our blog about winter walks in Götzens. Prague isn’t that far and would be perfect to further explore Czechia. Prague is one of the best places to have a magical Christmas in Europe.

Český Krumlov in Winter is Enchanting