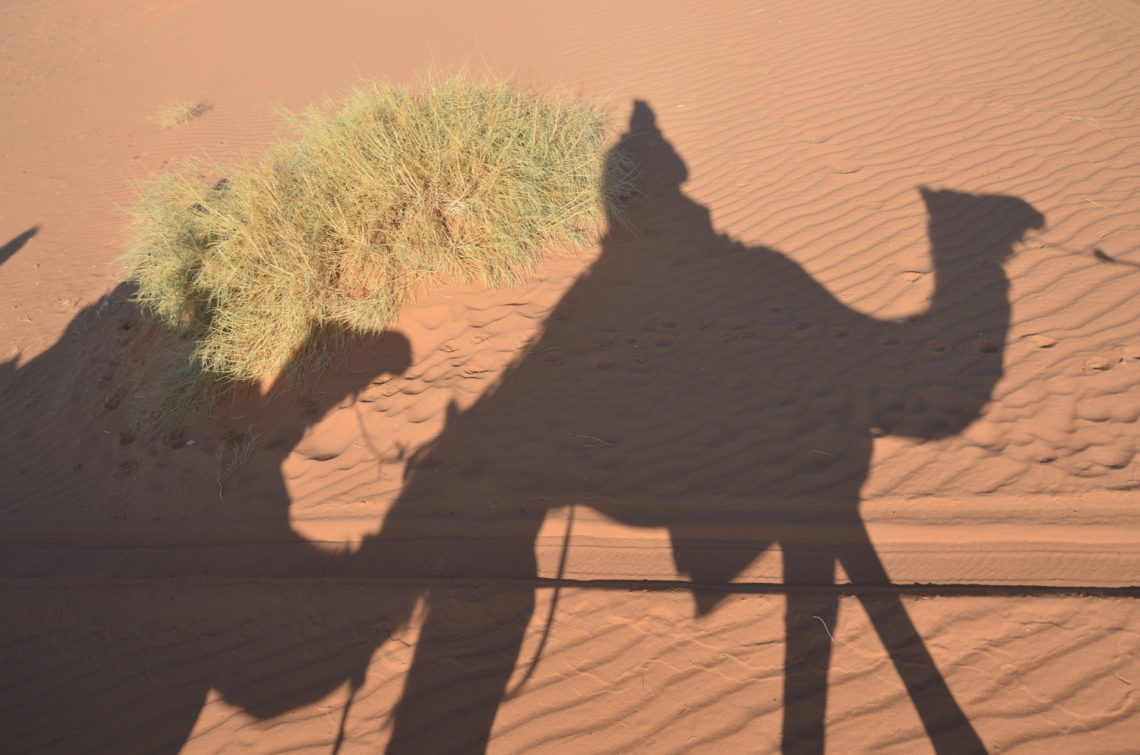 We went to Jordan on a grouptour with a tourcompany called Koning Aap. We went with a group, not because you can’t go on your own to Jordan, because you definitely can, but because we wanted Yuri to have some friends. We imagined Yuri would look for 5 minutes at Petra and then have enough of it. While we would be fascinated longer by everything there was to see. Our tought was that if Yuri had friends to play with, he wouldn’t mind us staying longer at the places. We were right.

Petra was already a long time high on our bucket list. So when we had the money and the chance to go, we did. We also had the idea that Yuri at the age of 5 was old enough to make this kind of trip.

How about safety? We felt completely safe during our whole tour through Jordan. We went in 2015 and there was the war in neighbouring Syria. A lot of family and friends asked if it would be safe. They thought Jordan wasn’t safe to visit. We checked and there was no warning against visiting only for the border with Syria. There hadn’t been any attacks in Jordan. So to us it looked safe, and it was. All the time we stayed in Jordan we didn’t feel unsafe for one moment. It kind of sounded strange since people warning us for Jordan, wouldn’t have said a thing if we had gone to Paris. And there had been attacks in Paris.

Madaba; first on our tour through Jordan

We stayed the first 2 nights in the Mariam hotel in Madaba. Madaba is a city close to the capitol Amman. The people were nice, it’s a big(ger) city. We were however a bit taken back by all the littering on the street. People seem to throw just about everything on the ground if they don’t need it anymore. This was not just in Madaba, but everywhere. Our guide told us they were busy with an awareness campaign.

On our second day we visited Jerash, where we made a stop at the souk before exploring the ancient Roman city. The souk was almost empty, sadly for the merchants there. The ancient Roman city was well worth a visit. We loved it. It’s well preserved, and even if you have seen your fair share of ancient Roman buildings, like we have. It’s still worth your time. It’s one of the biggest and well kept Roman sites outside of Italy. It’s a complete city so there’s a lot to see. There are several temples, a hippodrome, theaters, churches, several gates, Hadrianus arch, a forum and still some more buildings.

From here we went on to the Dead Sea. Paul and I had been to the Dead sea before, although on the Israelian side. We all went for a float in the Dead Sea. It was strange. Yuri didn’t like it. He had some tiny wounds on his legs and they stung like hell when he walked into the really salt water. It’s an experience not to be missed. Next to that we saw the sunset on the Dead Sea and this was also really beautiful and epic.

The next day we were en route to Petra, but not before we had some more stops first. We started at the Saint George church in Madaba. It’s an Greek Orthodox Church from the 19th century, which houses an treasure of early Christianity. Namely the oldest map of the Middle East/Palestine in existence. It’s among the remnants of a Byzantine church. The map is crafted in AD 560. From here on we drove to  Mount Nebo. It’s the mountain from which Mozes saw the promised land. There are beautiful views, a memorial to Mozes, mosaicks and a small museum.

After Mount Nebo we went further south and had a pic nic with a view on the Wadi Mujib. On the King’s way we traveled to Kerak. Kerak hosts a crusaders castle, which is nice to see.

In Petra we stayed at the Al Anbat Hotel II. We had 2 nights at this hotel close to the ancient city of Petra. Petra is why everyone comes to Jordan. The number one on their must see list. And it doesn’t disappoint, far from it. Although I had seen many photos of Petra, especially The Treasury. It doesn’t beat seeing it for real, or make it less grand. A deserved highlight on our tour through Jordan.

Further we visited a Byzantine church museum and the King’s graves. Then back to the Treasury down the siq and the path all the way back. It was over 12 kilometers, with a lot of stairs, but it was so worth it. We were totally beat, but we would do it again in a heartbeat. We felt our legs enormously. After we got back to the hotel we went to the hamman in the hotel. Yuri was too tired, he fell asleep next to me.

On the fifth day of our tour through Jordan we departed from Petra further on the King’s way south. After that we took the desert highway into Wadi Rum. We stopped at the 7 pilars of Lawrence of Arabia. We had camels cross the road in front of our bus. At a tentcamp in Wadi Rum, we left the bus and got onto jeeps. We took a 4 hour jeep tour safari through Wadi Rum. It was (terribly) cold, but also fun and beautiful. We drove through the desert and stopped at an arch, at drawings and so on. And then we collected wood and with tea we watched the sunset in the desert. A good start of Christmas Eve.

In Wadi Rum we slept in a tent camp for one night. It was very cold, but so worth it also. There was a campfire and with blankets wrapped around us we got warm again. Sleeping went well covered in 2 blankets. Getting out under the blankets to go to the toilet was the trouble. The sky was lit with stars and a full moon was a reward.

The next morning we left tent camp on camels, we rode them an hour long to a base camp where we switched back to our van. Paul and I had been on camels before in Tunesia. I was less scared this time than the first time. It was special to ride on camels in the desert so near the promised land on Christmas morning. The camel ride ended our stay in the desert.

From Wadi Rum we drove to Aqaba in our van. Aqaba was the last stop on our tour through Jordan. In Aqaba we stayed at the El Captain’s hotel. We still had a great part of Christmas day ahead of us, so after lunch we explored Aqaba on foot. First visit was the excavations site of the old city/harbor. We could wander around freely. Then we visited one of the mosques of Aqaba. Nice to see.

From there we wandered to the souk and had a blast with all that was to see there. We bought nuts and herbs and enjoyed wandering and looking around. From the souk we wandered to the public beach and took a glass bottom boat ride on the Red sea. We had a good view of the coral reefs which was close by the beach. The boat couldn’t go far, since then we would be crossing the border with Egypt or Israel and we weren’t allowed to.

On the 7th day we went to a hotel with a private beach. We didn’t stay at the hotel but could make use of their swimming pool and beach. It was the Berenice. It was a fun and relaxing day. With some swimming, reading and play for the kids. The water was pretty cold, but close by were coral reefs. Paul and some others did a bit of snorkling. Making this one of the best places to celebrate Christmas around the world. We freshned up at our hotel and in the evening drove back to Amman to take a flight back home at night.

These were the places we stopped at in Jordan. We loved our tour through Jordan and want to return some time. We took a group tour for families, which we loved. On the tour there were 2 guides and usually the Jordanese guide gave us a tour in English and our Dutch guide gave the kids a tour in Dutch. We would do this again, since the guides did a good job and Yuri loved having other kids around. The tour was organised by Koning Aap, an organisation in The Netherlands and Belgium. We can highly recommend this tour company. They were at that moment the only ones that offered family group tours from the age of 4. Our son was 5 at the time we took this tour.

We arrived in Jordan by plane and left by plane again. We flew on Amman from Schiphol, with a stop on Istanbul airport. The transport in Jordan was with a van with chauffeur. We had the same van and chauffeur the entire trip. This worked out well.

In short : we would go back to Jordan a second time and would have no problem doing this with a family tour from Koning Aap again.

If you like to read more about road trips or travels with kids, we have a blog about Gorges du Verdon on the site. 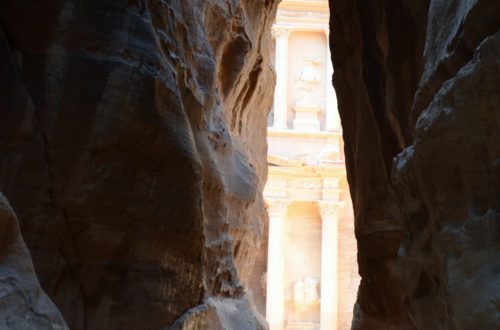