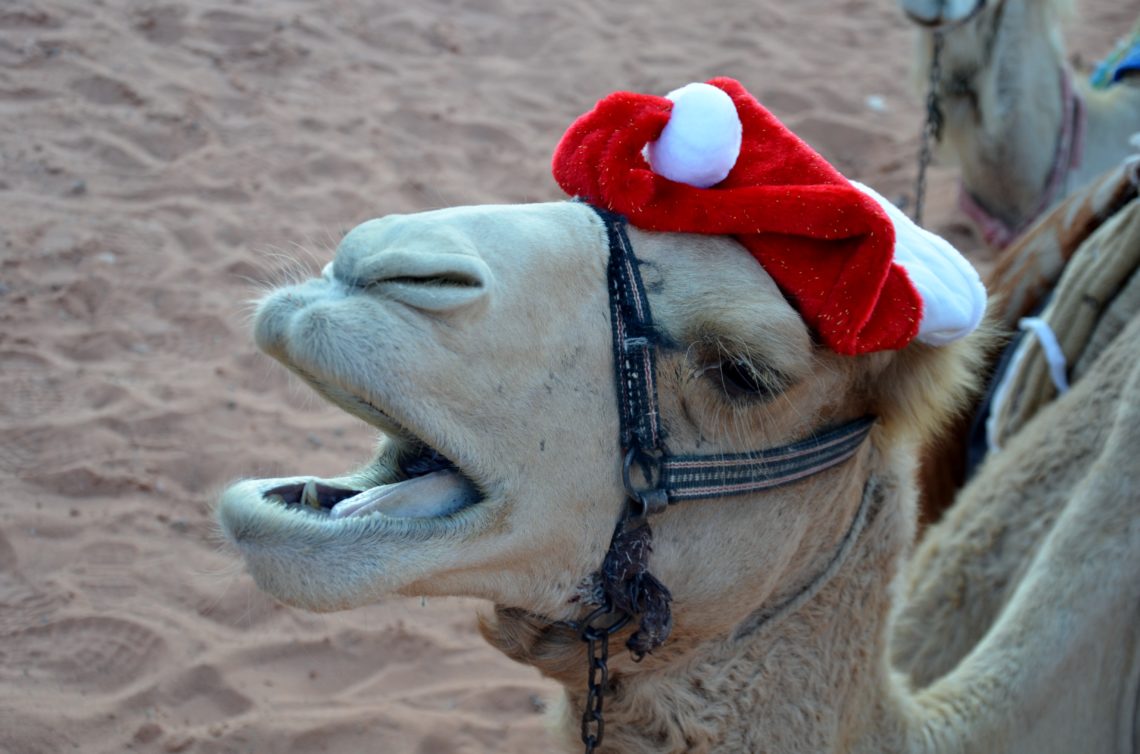 We usually spend Christmas with family in Germany. But in 2015 we did Christmas a little bit different. We were in Jordan, so had whole other surroundings, people and weather. We loved our Christmas in Jordan.

First some background. Jordan is a country in the Middle East. Neighbouring to Israël, Palestine, Syria, Irak and Saudi-Arabia. Christians have been living in Jordan for centuries. About 6% of the population are Christians, among them Roman Catholics, Syrian-orthodox, Armenian-orthodox, protestants, Copts and Melkite Greek Catholics.

Islam is the state religion. There’s no freedom of religion; muslims aren’t allowed to convert to a different faith. Christians are however free to practise their religion.

During our vacation in Jordan we felt safe there as Catholics. No animosity towards us ever.

On Christmas Eve we were in Wadi Rum, the desert. We arrived in jeeps at the camp after visiting the sites driving through the desert. At sunset we enjoyed freshly made tea. It was freezing cold. The thick blankets at the camp were very welcome. Covered in blankets we ate dinner inside a large tent and then we acted out the Christmas story of Jezus’ birth. We had lots of fun with it, it was a perfect Christmas play. We went to bed on time.

It was so cold waking up in the desert. The sun wasn’t shining yet, was still behind the rocks. So Christmas in Jordan started cold. We had breakfast at the camp and then mounted camels for a ride through the desert. Sitting on a camel so close to the promised land on Christmas morning was magic. After a little more than an hour we arrived at another camp and left the desert.

Christmas in Jordan might have started cold, but ended with warm weather. From Wadi Rum we drove south to Aqaba on the Red Sea. In the afternoon we had lunch on a terrace in the sun. We strolled through Aqaba; went to the souk and the beach. At the beach were glass bottom boats for rent; we made a half hour trip on the Red Sea. That was cool. In the evening we ate at a restaurant together.

Christmas in Jordan also meant swimming in the sea and playing on the beach. On Boxing day we went to a resort for the day and laid on the beach. The men also went swimming and looked at the corals. It was a relaxing way to spend Boxing day. In the evening we drove back to Amman to catch our flight to Istanbul.

This was our Christmas in Jordan, full of experiences and relaxation. We missed our family, but this was also a perfect way to celebrate Christmas.

We visited Jordan on a tour from Koning Aap.